The Most Sustainable and Eco-Friendly School in the Philippines!

“An internationally recognized university that provides relevant and innovative education and research for lifelong learning and sustainable development.”

“The Palawan State University is committed to upgrade the quality of life of the people by providing higher education opportunities through excellent instruction, research, extension, production services and transnational collaboration and innovations.”

“The Palawan State University is geared towards serving its stakeholders in the most honest, professional, decent, efficient and transparent means and shall always be concerned about their welfare and development as citizens of this nation.”

MEMORANDUM
FROM: Office of the University President
TO: All Vice President, College Deans/Principals, Campus Directors, Head of Units/Departments
SUBJECT: OBSERVATION OF HOLIDAY

MEMORANDUM
FROM: Office of the University President
TO: Vice Presidents, Deans, Directors and other Offices/Unit Heads
SUBJECT: Amendment to Memorandum dated May 29, 2020 re: Resumptions of Work on June 1, 2020
ate: June 10, 2020

To: All Faculty Members
From: The Office of the University President
Date: May 29, 2020
Subject: SY 2019-2020 End Semester Additional Announcement

To: All Regular Staff and Job Order Employees
From: Office of the University President
Date: May 29, 2020
Subject: Resumption of work on June 1, 2020

To: All College Deans, Campus Directors, Laboratory School Principals, Faculty Members
From: The Office of the University President
Date: May 29, 2020
Subject: APPROVED GUIDELINES ON THE MODIFICATION OF ACADEMIC POLICIES FOR THE 2ND SEMESTER, SCHOOL YEAR 2019-2020

Mr. Elijah Daniel B. Geanga, President of the University Student Government of the Palawan State Uni...

The Accrediting Agency of Chartered Colleges and Universities in the Philippines, Inc. (AACCUP) rece...

August 20, 2018 - PSU kicked off its celebration of the Mental Health Awareness Week with a parade r...

The Palawan State University external campuses in the southern part of Palawan recently underwent a ...

"Due to the scope and difficulty, the Bar Examinations is regarded as the most prestigious professio... 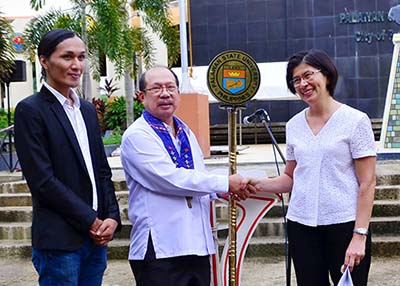 During the speech of Prof. Pontillas, she thanked all those who supported her leadership and those who worked with her during her stay as the Office-in-charge of the University. She also congratulated Dr. Docto for his appointment as the 8th University president.

Dr. Docto formally accepted the University mace which is the symbol of power and authority of the Office of the University President from BOR and University secretary, Prof. Venzon Limpiada and from former OIC Marissa Pontillas. He was elected by a majority vote from the members of PSU’s Board of Regents in a special meeting called for the sole purpose of selecting a new president. The BOR’s special meeting took place at Park Inn by Radisson, Davao City on July 6, 2018. Dr. Docto was immediately sworn in into office following his election as the 8th PSU President.

During his acceptance speech, Dr. Docto thanked all those who supported him and prayed for him; as well as those who met him at the airport when he arrived on July 8, 2018. He said that he truly appreciated the gestures of all those who were happy for his appointment. He asked the PSU community to support him and his programs and to start moving forward as one community.

A press conference attended by the representatives of the different media outfits in the city and in the province was held at 3:00 in the afternoon of the same day at PSU Hostel . The meeting with the media personalities served as PSU’s formal announcement to the community of Dr. Docto’s appoinment as the 8th University President.