The College of Teacher education may be considered as the oldest college of Palawan State University since the university started as Palawan Teacher’s College, the first teachers-training state college in Palawan. It was founded on March 2, 1972, through the efforts of then Congressman Gaudencio E. Abordo who also authored Republic Act No. 4303, with Dr. Walfrido R. Ponce de Leon as its first President.

The College of Teacher Education was formally established as College of Education in 1981. Programs were implemented in consonance with the revised programs of the Department of Education, Culture and Sports (DECS). Among them was the Integrated Teacher’s Education Program (ITEP), which was a ladderized curriculum. Other curricular revisions likewise took place in the BEEd and BSEd programs to keep with the evolving needs and demands required of basic education teachers.

In 1996 and 2004, the College was granted Levels I and II accreditation status respectively for its teacher education programs. These were awarded by the Accrediting Agency for Chartered Colleges and Universities in the Philippines (AACCUP).

In order to clearly distinguish its mandate, the College of Education was renamed into College of Teacher Education in 2006.

A Memorandum of Agreement forged with Manila Xiamen International School (MXIS) in January 2005 gave the College an opportunity to send its student teachers for off-campus teaching at MXIS in Xiamen. People’s Republic of China. As of 2008, there have been (10) BEEd/BSEd senior students sent to MXIS pursuant to the agreement.

In June 2008, the Special Science Class was offered in the Laboratory High School Department in addition to the Basic Education curriculum.

The Intensive LET Review, a subject course program designed to better prepare the graduating BEEd/BSEd students for taking the Licensure Examination for Teachers, was introduced and made an integral part of both the BEEd and BSEd curricula in October 2006. This brought about a significant increase in the passing rates of the College’s graduates in the Licensure Examination for Teachers in both the elementary and secondary levels during the last three years, with the first time examinees registering passing rates ranging from 60% to 70%, compared to the national passing rates that have been hovering at 26% to 35%.

In June 2008, the College of Teacher education offered Bachelor of Elementary Education (with specialization in Arabic Language and Islamic Studies) to thirty-seven (37) grantees of the Department of Education under the Accelerated Teacher Education Program (ATEP). The ATEP is a peace-building strategy and response of the BEAM (Basic Education Assistance for Mindanao) to the professionalization of azatidz in order to meet the teacher supply for Arabic language and Islamic Values Education (ALIVE) in the public schools and the demand for better teacher qualification in the private madaris. Out of the thirty-three (33) grantees who graduated in April 2010, three (3) initially passed the LET and are now professional teachers.

The College has hosted and organized a number of teacher-training programs such as the DepEd Certificate Program for High School Non-Specialists in Science and Mathematics (2007-2008), CHED’s Continuing Program for Faculty of Tertiary Schools (PSU as the delivering higher education institution for Palawan, 2008), Seminar-Workshop for Teachers and Principals on the Use of CONSTEC(May 2008), Teaching Beginning Reading (May 2008), Education Student’s Congress (March 2010) Teacher Induction Program for Beginning Teachers of the Department of Education (2008 and May 2010). It has also been tapped and awarded a P650,000.00 grant by the UP-Engineering Research and Development Foundation Inc. as partner institution to gather data for the DepEd’s Basic Education Resources Survey (BERS) Project in region IV-B conducted in April-October 2010.

In September 2010, all graduate programs of the University were placed under the academic and administrative supervision of the college where the related undergraduate program/s is/are being offered in order to effect vertical articulation of disciplines. Hence, the Doctor of Education, Master of Arts in Education (majors in School Leadership & Instruction; Guidance and Counseling; Physical Education; Social Science; Mathematics), Master of Arts in Education (Majors: Language Studies-Filipino Stream; Language Studies-English Stream; Biology; Chemistry; General Science; Physics), Diploma in Teaching; Diploma in Social Science Teaching, Diploma in Language Teaching – English Stream, and Diploma in Language Teaching - Filipino Stream are now part of the College’s curricular offerings.

The PSU College of Teacher Education has been duly recognized as a Center of Training Institution for the DepEd Certificate and INSET Programs in March 20, 2008 and the Commission on Higher Education, the Department of Education and the Teacher Education Council of the Philippines. The Commission on Higher Education identifies the College as a Center of Excellence for the period 2010-2013 in recognition of its teacher education program which “continuously demonstrated excellent performance in the areas of instruction and publication, research, extension and linkage institutional qualifications and provides excellent quality pre-service teacher education to meet the needs of progressive teachers f\or elementary, secondary and special education programs in the Philippines” (per CMO No. 24 s, 2010on July 16, 2010). 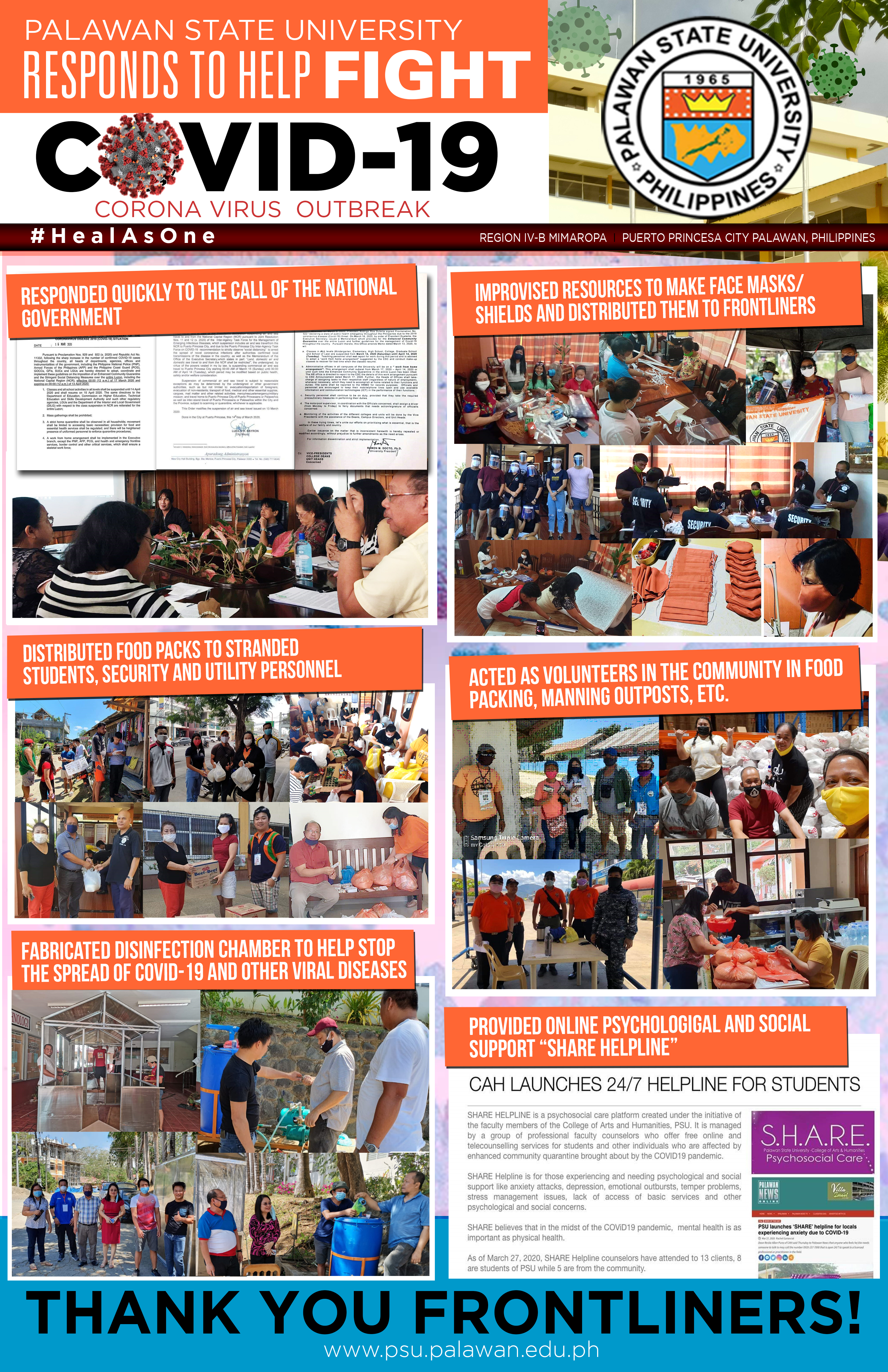