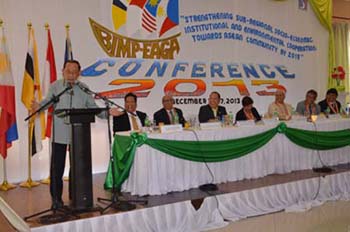 “Let this day be the beginning of even closer cooperative undertakings, more competitive product endeavors, and the true working models of integration that others can admire.”

Such were the words of former Philippine President Fidel V. Ramos during the opening program of the BIMP-EAGA Conference 2013 (BEC2013) on 16 December 2013. The former president who is considered to be the brain behind the BIMP-EAGA formation served as keynote speaker during the said international event.

It must be remembered that in 1992, former Pres. Ramos forwarded the idea of creating an economic development area among the countries of Brunei, Indonesia, Malaysia, and the Philippines to promote stronger cooperation and understanding among these four southeast Asian countries. This proposal was welcomed by the leaders of the three other countries, thus in March 1994 the establishment of the Brunei-Indonesia-Malaysia-Philippines East Asian Growth Areas (BIMP-EAGA) came into fruition. The goal of BIMP-EAGA is to accelerate economic growth and development in the focus areas of the four countries. Specifically, these focus areas are: (1) the entire Sultanate of Brunei Darussalam, (2) Irian Jaya, Maluku, Gorontalo, and all the provinces of Kalimantan and Sulawesi in Indonesia, (3) the states of Sabah and Sarawak and the Federal Territory of Labuan in Malaysia, and (4) the province of Palawan and the entire region of Mindanao in the Philippines.

Early on, Public-Private Partnerships (PPP) was encouraged for the sustainable growth in the sub-region. It was determined that for BIMP-EAGA to grow, it must be market-driven and private sector-led, with the public sector only acting as a facilitator and enabler.

In the early years, cross-border agreements and developments among the four countries were accelerating and expanding at such a short period of time. There were significant increases in both domestic and cross-border investments in the transportation, telecommunication, and tourism industries. This meant more job opportunities for the people in the sub-region. If not for the 1997 Asian Financial Crisis that seriously affected countries in Southeast Asia, the economic growth in the sub-region might be booming today.

In the early 2000s, there was a renewed interest among Asian nations, to address poverty and security issues in the BIMP-EAGA. Several measures and institutional reforms were put into action to boost the revitalization of BIMP-EAGA. By the end of 2005, new development strategies and directions were formulated to create the BIMP-EAGA Roadmap to Development 2006-2010. Although the Roadmap was not fully implemented as originally planned, many targets to increase trade, investment, and tourism during the 5-year period were somehow achieved.

Nearly 20 years since the creation of BIMP-EAGA, more work is to be done. Pres. Ramos emphasized that BIMP-EAGA as a sub-region of the Association of Southeast Asian Nations (ASEAN) should look at what it can contribute to the development of the ASEAN Economic Community in 2015. Establishing and intensifying meaningful linkages were highlighted as necessary to this economic development.

Among those linkages is the academic sector. Ramos commended Palawan State University (PSU) for getting involved in BIMP-EAGA affairs and partnering with the Universiti Malaysia Sabah for the BEC2013. He noted that academic institutions can greatly contribute to BIMP-EAGA initiative through intellectual power and generation of reliable empirical data/ research information needed for sound regional planning and competitiveness.

Being the first higher education institution from the Philippines to pioneer such an event, PSU is prepared to do more. With PSU President Jeter S. Sespeñe on board, his goal of turning the University into a premiere research university in the Southeast Asian region is perfectly aligned with the help that PSU can extend to the BIMP-EAGA initiative. He has committed the University’s support to the BIMP-EAGA initiative by giving priority to research projects in line with the initiative’s four strategic pillars, namely: (1) enhanced connectivity, (2) food basket, (3) tourism development, and (4) sustainable environment.

This recent involvement of the academic sector in the BIMP-EAGA initiative will hopefully pave the way for a more connected and open communication in the sub-region.